In Chapter One Pa heard squeals in the middle of the night,
so like a man of that time, grabbed his gun and headed out the door.
With no neighbors nearby, he probably ran out in his union suit.
At least it wasn’t whitie-tidies.
As my daughter would say, “eewwwwwww, that’s totally gross.”

A big black bear is trying to grab their pig,
Pa shoots and misses, but assures the family- 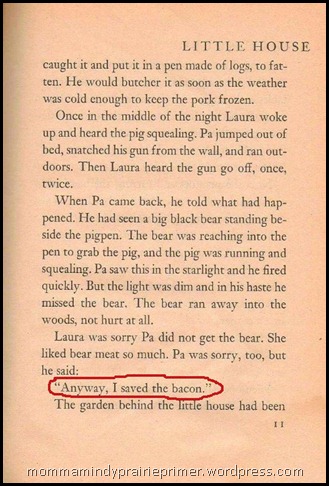 Of course, I had to look up what that meant.
It wasn’t even in the curriculum.
I’m just snoopy like that.
Maybe curious.
I just gotta’ know stuff.

I went to my first source.
Dictionary.com says the term “save one’s bacon” is an informal idiom.

They define it as “ to allow one to accomplish a desired end; spare one from injury or loss.”

They further state:
At the time it was first recorded, in 1654, bacon was a prized commodity,
so perhaps saving one’s bacon was tantamount to keeping something precious.

We did an IDIOM bunny trail.

Back to Dictionary.com to find the definition of an idiom. 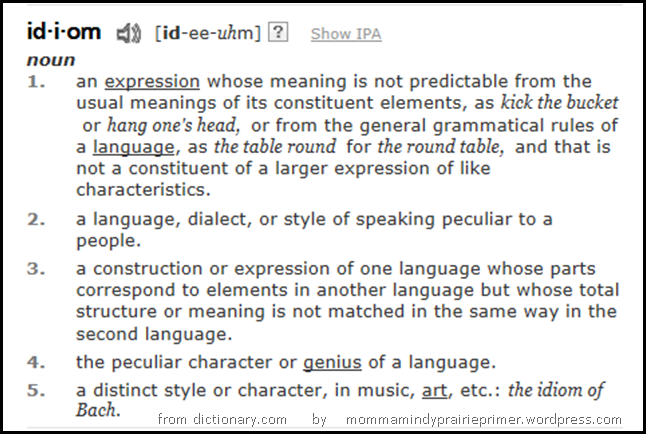 They also pronounce the words for you.

I have always been an avid reader, but for the past 25 years I’ve been around primarily people
who begin life with no vocabulary, move into limited vocabulary, and when they have a
vocabulary suitable for adult conversation, they move out or get jobs or find other ways to be
away from Mommy all day.

So, I know words, I don’t know how to say them.
When I’m around grown-ups, I sometimes ask them if I am pronouncing a word correctly,
because I’ve never SPOKEN it I’ve only READ it.

Like genre.
I had to ask someone in my writers group how to pronounce this word.
If you’re proud, you don’t learn.
The opposite of proud is embarrassed.  I often embarrass myself.

Then I went to find a list of other idioms to share.
Idiom Site is a great source, even they don’t have “save the bacon.”

I realized America is obsessed with bacon.

People eat bacon for meals, snacks, and for deserts.

There are  bacon t-shirts, candles, crafts, air fresheners and candles.

We’ve gone hog wild for the stuff sliced usually so thin
your in-laws will never come back.

Just look at this bacon pie.
A man lover’s pie from Comfort Food From Louisiana.
That’s some pig!

Back to the idiom.
In Pa’s case it wasn’t an idiom, it was the true encounter.

Did Pa use the idiom in context for humor?

We’ll never know.
But we know, he saved the bacon, and for that,
America is truly grateful.

In Chapter Two,
Pa saves another pig’s bacon from a bear,
Pa saves his bacon by shooting the bear,
then saves his family’s bacon by feasting on bacon and bear.
Here we learn that bears go better with bacon.

And now, you’ve followed my exciting adventure on an
idiom bacon trail.

2 thoughts on “Pa Saves the Bacon!”